Support to Police in the Reconciliation Process with the country

The aims of this Project are increase security and its perception from the population within respect for human rights and according with the principles of State of law. There are 3 main objectives:
1- Reinstate a link and to bring closer population to the police with the idea to improve the security.
2 - Professionalize the police operative capacity establishing links with other professional involved (Gendarmerie, Justice, Civil Society)
3 - Reinforce the police role within a State of Law (Human rights, Gender, Governance).

The Project has to create a security service focus in the population through to the following actions: Rehabilitation of the 3 pilot police stations; increasing policemen sensitivity in their public security missions like neighborhood police & reinstate bonds between Police and population. 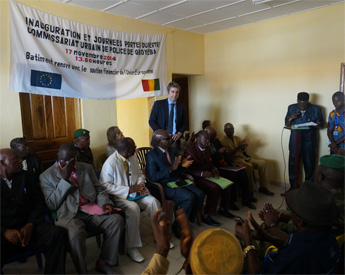